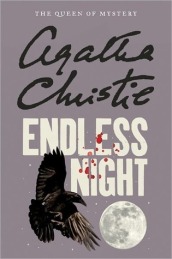 Endless Night is a very interesting and unusual work that somewhat stands out from many of Christie’s other novels: like The Pale Horse or Crooked House, it’s rather in a league of its own.

It has a distinctly 1960s setting, which would have been contemporary when Christie wrote it but is now charmingly vintage. Whereas many of the village or country house murder mysteries feel old-fashioned in a timeless way, Endless Night feels distinctly period. Somehow I’m reminded of Hickory Dickory Dock with this, though it’s a much earlier work (1955 vs 1967 for Endless Night).

The plot in brief: the hero, Michael Rogers, falls in love with a plot of land called Gipsy’s acre as well as wealthy Fenella “Ellie” Guteman. The young couple build the house of their dreams, until amid accidents, gipsy curses and threats, it all descends into a deadly nightmare.

It’s hard to offer more details or say what other Christie novels compare with it without massively spoiling the plot. Death on the Nile and The Murder of Roger Ackroyd obviously spring to mind.

Endless Night was one of Christie’s favourite novels, though she wasn’t particularly happy with the film, particularly disapproving of Britt Eckland’s (brief) nudity! The book is certainly a must read for Christie fans and traditional murder mystery fans.